We woke up, packed our things and loaded the car. We headed back down to Beale Street to eat at the famous Blues City Cafe. Talk about some good ribs...make you slap yo mama. 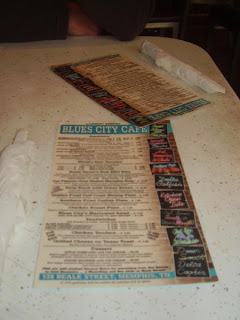 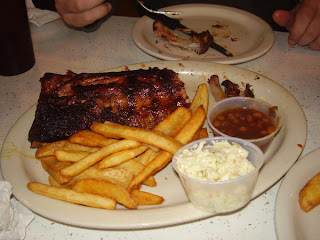 This was after we each had about three ribs a piece. It was a huge rack of ribs! We didn't finish it all. It would've been a great meal for four people. You can tell the plate isn't about the sides, which are served in tiny condiment cups, the plate is all about the tender, fall-off-the-bone southern ribs.
The restaurant was a real greasy-spoon type of place, but it wouldn't be the same if there were nice linen and silver on the tables. 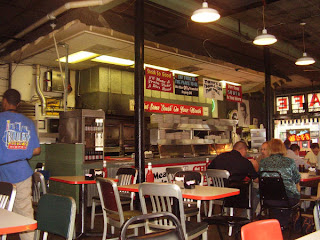 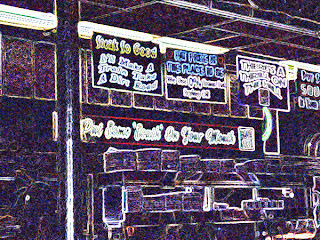 Our next stop was a few shops on Beale. We picked up some dry rub, real molasses syrup with pecans, BBQ sauce and some other odds and ends to remember our trip to the Soul City.
After we left the shops we headed towards the famous Peabody Hotel. We actually stayed directly across the street from The Peabody and I was so upset when I saw it. I've watched some shows on the Travel Channel about the famous Peabody but didn't realize it was in Memphis...it slipped my mind. But, we did get to go visit the ducks and we bought our first ornament in the Lukcy Duck gift shop.

If you don't know about The Peabody it is famous for the ducks that arrive daily at 11 AM and they hang out in the fountain and run around the lobby until they are escorted out at 5 PM. It is like someone famous is arriving when they are escorted downstairs (They have their own room at the hotel) People gather and make a pathway for the ducks to waddle in. They head for thier fountain and occassionally get crazy and chase people. They are however pretty used to everything and the hub-bub of the people in the lobby. 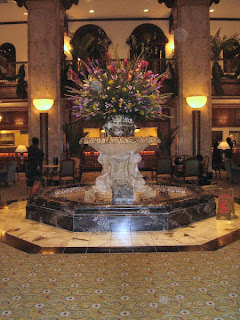 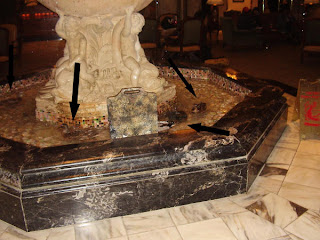 I've kindly pointed out the ducks for you with black arrows.

They DON'T like cameras. You can stand there and stare at them and the minute you pull out the camera (they are smart ducks) they swim as fast as thier feet can paddle away and try to hide on the other side of the fountain. 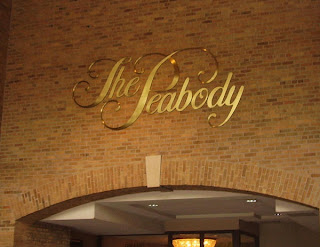 After we left Memphis the rest of the day was spent in the car again. We stopped about half-way in Jackson, TN to shop a little, Blake needed tennis shoes, and to relax. The drive from Memphis to Gatlinburg was about 7 hours.

We got to Gatlinburg about 10 PM and drove through the town. We headed out to the cabin after we took in the sites of the city. Gatlinburg/Pigeon Forge is like the Vegas strip for children. There are go-kart tracks, dinner shows, gift shops, museums, arcases, carnival areas every 1/2 a mile...it's crazy.

One of the crazy buildings on the main drag...
When we first pulled into town the Christmas lights and scenes were "So pretty" but after the 10 mile journey down the main drag it got a little old. I thought it was a quaint little country town with the bare necessity type stores but no there was plenty to see and do.

We found our cabin, which was difficult because it was very foggy and the road to the cabin was basically one lane and headed up the steps to the front door. The cabin rental company sent me an email and provided a 6 digit keyless entry code. We tried the code and it didn't work. We tried and tried and still every code we could think of was not unlocking the door. The number the company gave to us was for emergencies and was an answering machine so we had no help.

The code was 11302007, the month, the last day of the month and the year, so we tried 10312007 thinking that they didn't change it from the October date and even tried 12312007 but nothing worked. I was a little upset but Blake is good about keeping me calm and we decided to head back into town. This was the first "mis-hap" of our trip but we weren't going to let it ruin our trip. We knew there would be "room at the inn" because there was about 100 of them on the main road.

We stopped at the first one we could find and asked if they had any rooms available. The man seemed annoyed that we were asking him to do his job and told us that all he had left were jacuzzi suites. Now, we stopped at a Quality Inn, jacuzzi suites?? Right. Anyway, he proceeded to tell us that the room was $69.99 a night though and looked surprised when Blake told him that was fine. I guess being in the car all day and wearing jeans and t-shirt made us look poor.

Anyway, we got in the room and were pleasantly surprised. It was actually really nice. There was a fire place and sitting area and a tub that could probably hold at least four people. So, the night wasn't ruined by the cabin mis-hap and everything turned out great.

The next morning I got in touch with the cabin rental company and you wanna know what the code was: 09302007...we only tried October, November and December...if we would've only tried every month!! :)

Here's some photos of our cute little cabin...The Golden Tusk. The decor was quite odd for being in the Tennessee mountains but it was fun. 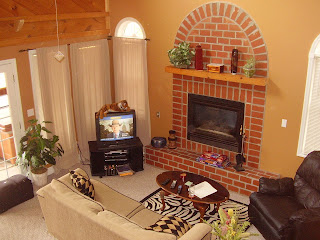 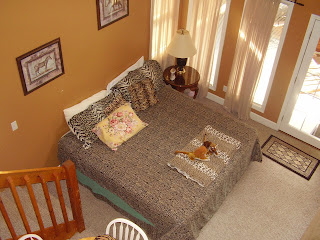 Looking down from the loft onto the first floor 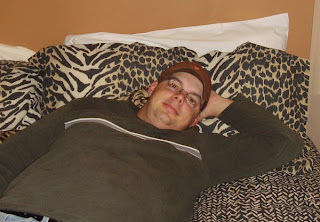 Blake relaxing on the bed 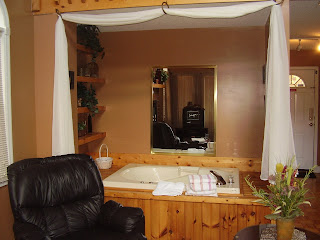 Jacuzzi in the living room 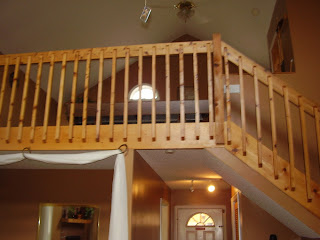 Looking up from the first floor to the loft. There was a pool table upstairs 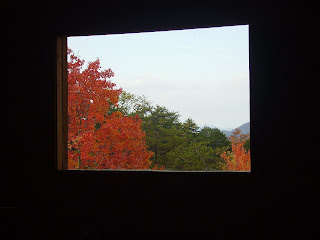 There was very tall ceilings and this window was so you could see the view from the loft...it was gorgeous 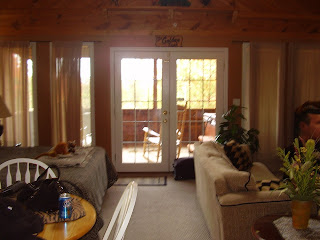 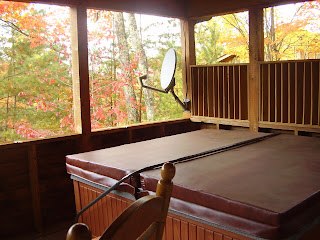 The hot tub on the deck 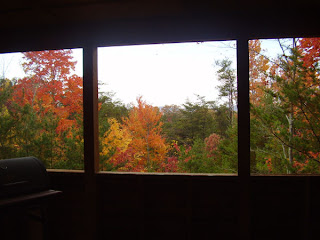 The veiws from the deck...so pretty 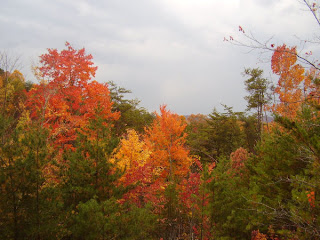