Here's some sonogram and "sharing the news" pictures... 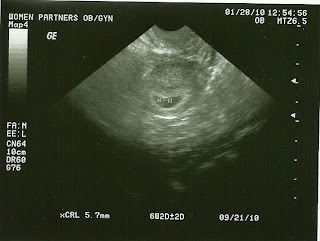 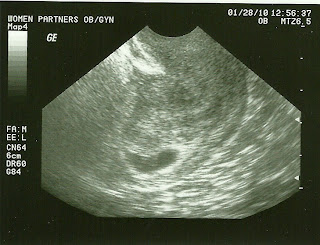 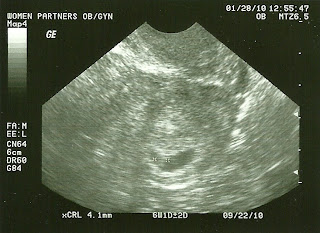 These are all the 6 week sonogram photos. You can hardly see a thing but this is the first time we saw the heartbeat. It was the most amazing thing I'd seen and I just stared at the screen, mouth open in amazement. It was also bittersweet because due to work obligations Blake was unable to go with me to this appointment. He went with me to the first appointment, 10 days earlier, but the doctor wanted me to come in again so we could see the baby better and the heartbeat. I'm not sure why I went ot the doctor so early but when i called and gave them all the informaion they asked if the 18th would be ok and I of course was anxious to get in to see my doctor so i said sure! The first appointment we did a sonogram but only saw the yolk sac and she checked that everything else looked ok. She knew I was anxious to get back in so she let me schedule our next appointment for only 3 weeks later so Blake could come and see the baby...crazy how much 3 weeks can be enough time for SO much change! This is where these pictures of the baby were taken... 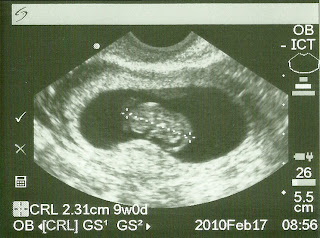 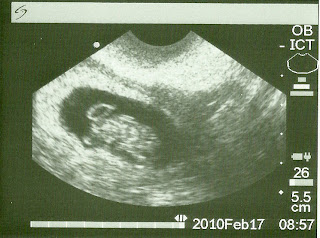 Even though our baby is a precious angel, that's not a halo above it's head. :) It's the yolk sac that should soon be gone.
At the 9 week appointment I was amazed to see how much easier it was to see the baby. Baby K has grown so much! Blake got to see the heartbeat, the dcotor showed us the umbillical cord and said it looked great. This appointment we paused the sonogram a lot because Baby was moving around like crazy! Dr. Vanover said baby k was putting on a show for mom and dad and boy was the baby "performing!" Flipping and wiggling and dancing around. Baby must like plain cherrios and banana slices for breakfast! I can't wait until our next appointment! I love hearing about our babies growth. The next appointment we won't get any pictures but we will just get to hear the heartbeat. I can't wait!! 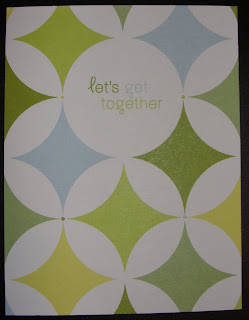 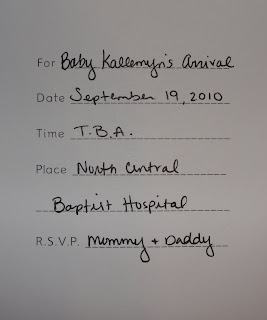 I wanted to tell our parents in a special way and thought of all different kinds of ideas but I thought this one was the most fun. We each called our parents to ask them to go to dinner with us that night. We hadn't seen either set of them in a while so it was perfect timing for a get-together dinner...they wouldn't "be on to us." :) Before we left for dinner we stopped by their houses to tell them the good news.
We went by Blake's mom's house first. I was so nervous and couldn't stop smiling and just knew the second she saw us she'd know. But, luckily I was able to keep composure for a few minutes. I casually gave her the envelope and said, "we are having a little get-together, ntohing big, which is why I didn't want to mail the invites." I know...kind of dumb, but how else was I going to explain handing her a random invite. No one's birthday was coming up so i just "winged it." :) Kathy read the invite, looked at us and said, "What??? is this true" with a huge smile on her face and then gave Blake and me a hug. We told her about our doctor's appointment that morning and then said that was the real reason behind dinner plans but we had our parents still to tell.
We left her house and headed to my parents. My mom was winding down from her work day and my dad, Blake and I were talking in the kitchen. i was so anxious to tell them and wanted my mom to come in with us but she's a busy abee and never still. After she was in the kitchen I handed her the envelope and told her the same generic story about a little causual get-togther. my mom and ad werw stanidng on opposite sides of the island but I knew my dad would quickly now because my mom started tearing up and kept repeating, "Really? really? really?" over and over . i told her to show dad so he could join us too but I finally had to grab it from her hands and give it to him to read. They were both ecstaic and cryed and gave us big hugs.
It was a great, fun day and we enjoyed dinner with both sets of parents talking about baby and all we have to look forward to!