What a day! We had a follow-up sonogram scheduled for 1:30 pm which meant the morning was going to drag by as slowly as possible because the morning knows how much I look forward to seeing our baby bounce around. But, 1:30 finally arrived. And, so did 2:30. We were still in the waiting room at 2:30 and I kindly asked the receptionist if she knew how much longer the wait would be so I could call and let my boss how late I would be in returning to work. A few minutes later the tech came and got us. Apparently she was just shootin’ the breeze or something because she seemed annoyed to have to stop whatever it was she was doing and see us.

It was not the original sonogram technician we had for our first “real” sonogram. I was already annoyed because of the longer than normal wait but once we got back there she basically undressed me which was awkward since she just needed my belly. Then, she started to quickly take pictures of our baby and not tell us if everything was looking good or not. This was a follow-up sonogram so I wanted to be assured that everything was checking out ok since the first time around we didn’t get the “ok” on some of the pictures the doctor needed.

But anyway…she snapped away quickly, told us to turn our heads while she was down in the nether region getting measurements of the legs so we didn’t see anything and still are going to be surprised on D-day. Blake didn’t want to be told exactly what or where they were looking so he could try and see something but still not know for sure. But, she told us to turn our heads so we did.

One of the main reasons of the follow up was that they really needed to get a good picture of the face, the last time this was an issue too, apparently our child is shy (takes after Blake) and hates photographs. S/he had her arms and hands and legs and feet over her face. The sonogram tech kept pushing the wand into my abdomen harder and harder. NO WONDER Baby is protecting it’s face with it’s arms and legs…you are going to poke it’s eyes out!

Then, the entire time the tech is calling our baby stubborn, which at first was like, “Ok, yeah, s/he isn’t cooperating, sorry” but about the 50th time she said it I wanted to slap her because, “Hey! That is my child. Stop insulting her/him!” She then kept telling us, “Watch out because attitudes are developed in the womb so we are going to have a stubborn child on our hands.” Now, this is something that I can say about my own child or family members but no one else should ever say that. You know? If you can’t tell, this lady rubbed me the wrong way.

Then, she only gave us two pictures. The first sonogram we left with a stack of 6 or 7 and the tech was so nice and didn’t insult my child over and over. Oh, the best part was when I had to roll over, basically almost on my stomach, for the tech to get a good profile shot of the face. The way the baby was laying the only way to see the face was from the uncomfortable position I guess. But, she poked the wand so hard into my side that the baby started freaking out kicking and punching the “air.” Haha. S/he didn’t like being bothered and didn’t like being poked so hard either. “Look at those kicks of protest!!” The tech said. Yeah, like I said, s/he doesn’t like to be poked so hard!

Anyway, the rest of the appointment was great. I’m measuring about 4 days ahead of my due date but those are only 5% accurate anyway so whenever baby is ready we will be so thrilled to welcome it into the world. I used to want to be late so I could have my 12 weeks of maternity leave go through Christmas break but at this point I don’t care. My doctor said I’d eventually get that way. God is going to give us this baby when He is good and ready so here we will be, sitting, and waiting. 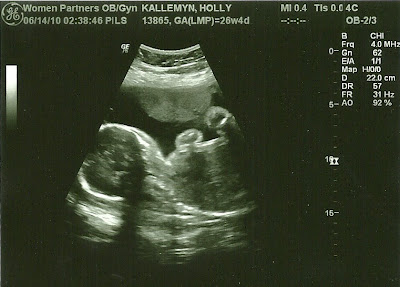 This is the back of the head, one arm and one leg 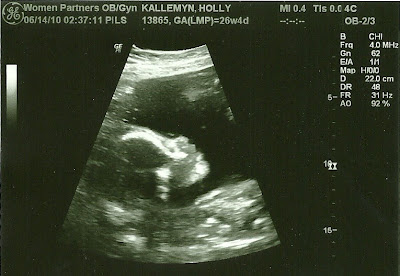 I think this looks like Blake. When he sleeps on his back and snores. :) But for real I can see my nose and Blake's lips. I think we have a cute kiddo!

S/He's so cute already! Y'all are getting so close. Can't wait to meet Baby K!