Another month, 2 weeks and 1 day have passed since I updated this online "diary" and "reference" book of Anna's life have passed. I seriously cannot believe Anna will be 6 months in 2 weeks and 2 days. Wow! In 6 more months she will be ONE! And, if the next six months passed by as quickly as the first I...I just don't know. It's all going by so very quickly. Everyone told us it would be it is crazy that EVERYONE, for once (ha!), was right.

The last month and a half Anna has grown and learned so many new things. She's laughed, rolled from tummy to side, then finally tummy to back, started eating (really well!), and just plain turned into a "big girl" over night it seems. She's sitting up supported but  can sit for a few long seconds by herself. We stopped feeding her for a few weeks in late December/early January because I didn't think she was ready. So, when we started back up, right around 1/19 the 5 month mark, she took to it so much better. She knew to open her mouth when the spoon came towards her and can suck the food off of the spoon and she smacks her veggies down. We haven't started fruits yet, so she can learn to like veggies first, but she does love the sweet potatoes and carrots, which are also sweet.

Anna has been rolling to her sides for a few weeks starting in late December but now she's a girl on the go and rolls around everywhere. She will roll herself to sleep and I'll go in there before we head to bed and roll her back to her back because I'm still worried she'll sufficate. Ha. I know, she's fine but they thouroughly freaked me out in the NICU and in the mandatory CPR class we had to take before we were allowed to take her home. (One of the many "tests" we had to take before we could take her home from NICU)

She still loves reading but is now putting everything in her mouth. She loves her lots of links and we have them hanging on basically anything that is still. She is just at that age where she is taking every single thing around her in. She loves music and sings to me all teh way home from daycare after I pick her up. She also enjoys talk radio (which I listen to because I'm really an old lady in a 29 year old body) but prefers the music. She literally starts to sing along with whatever is on the radio.

Her little personality is starting to come through. I think she is going to be a good mixture of Blake and me. Sometimes she is so serious (daddy) and other times she just starts laughing at absolutely nothing (mommy). She loves her changing table and loves to talk and blow bubbles and "spit" while she's laying there. I hung a little picture on the wall right above the dresser where her changing pad is and it's two little birds sitting in a tree. She loves to talk to them. We've named them Flip and Flap. I think Flip is her favorite but she loves the both of them. Other than Flip and Flap and her lots of links a little doll she named Mindy is her favorite toy. She reaches for her and "hugs" her tight before chewing on her pigtails or hands or feet. Anna was in the hospital early in January for RSV. Blake's Aunt Mandy and her bf Mike came to visit and brought Anna her first doll. (I KNOW!! Almost 6 months old and the girl didn't have a doll! Crazy) But, she named her Mindy after Mandy and Mike. She's a smart little girl.

I love picking her up from daycare. Her face lights up and she gets this huge grin and she immediatly starts talking and telling me about her day.  Anna is learning so much in her daycare class. She loves her teachers. They let the kids "paint" with pudding (in case they put their little hands in their mouth) and they take cute little pictures with different props. Some days when I pick her up I look at all the babies and think, "Where is Anna." It's like she grew and changed during the 8 hours I was away. Somedays I cry about leaving her and wishI could stay with her all the time. But, I realize how much she is growing and learning while she is there and it makes me smile. No matter what I say I know I wouldn't do half the things with her that they do in a day with her. I'm thankful for such a great place in town that takes such great care of her. It is also such an exciting thing to get to come home to! I know her little similing face is going to be so thrilled to see me, no matter how long or terrible my day might have been. I have few crappy days, for which I am thankful, but she makes even the best days 100 times better.

I'm super excited to see what the next 6 months bring but I'm so sad because I know she's going to be grown and leaving before I can blink. Ok, I just blinked and she's still asleep in her bed, but it seriously goes by so quickly. I try and remind each day to slow down and enjoy every second with her. It's going to be the best ride of our lives! 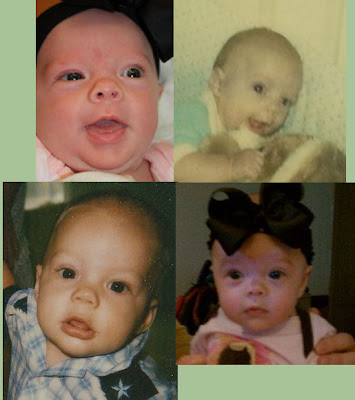 I just threw this together to show just HOW much the daddy and daughter look alike. They are adorable! 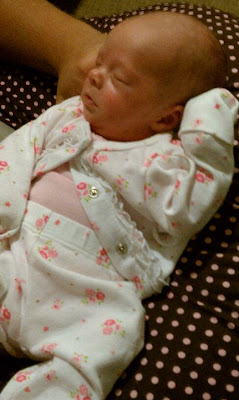 This was Anna at 3 weeks and 5 days old. The day we brought her home. I can't believe how much she's changed and grown. however, it would be terrible strange if she hadn't in 5 months. :) 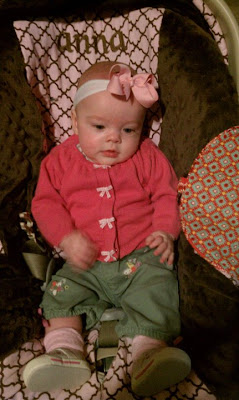 Anna, heading off to school :) 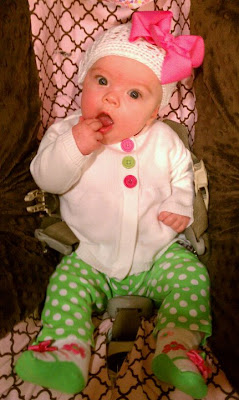 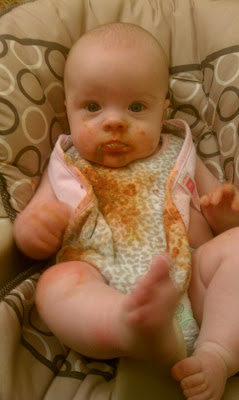 Loves her some peas and carrots! 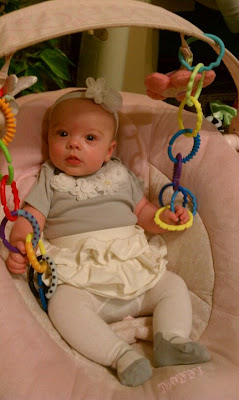 Playing with her lots of links 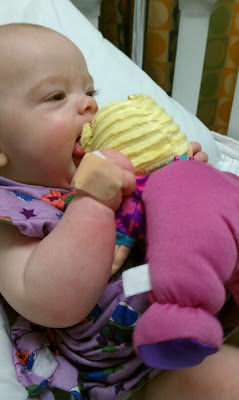 In the hospital with her doll Mindy 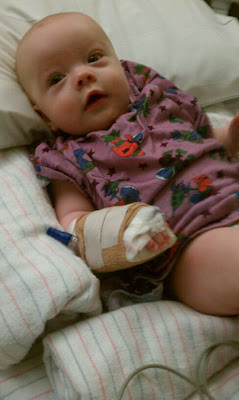 Anna, during her hospital stay for RSV