Remember, this post? It was my "wish list" of things to do on our free weekends. This was one beautiful weekend weather wise and we enjoyed TWO outings.

Saturday we went with my mom and dad to the chuck wagon cook-off at the ag museum here in Boerne. There's about 25 chuck wagon cooking teams who compete. They all get the same food to cook and serve and everything is cooked over an open fire or in a dutch oven. When you buy your ticket you are given a number from which your lunch will come from. We got Wagon 15. It was actually pretty good! 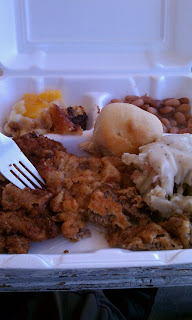 Anna was in good spirits and she had peas and peaches for lunch and enjoyed it throughly. They had pony rides and although she didn't really ride we did set her up there and take some cute shots of her "riding" She had her cowboy hat and was all gussied up. I am looking forward to next year! 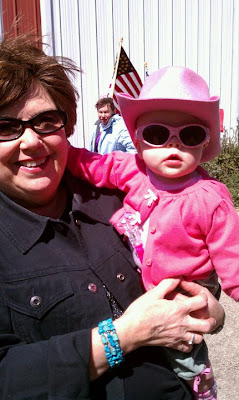 Mimi and Nanners all gussied up in her duds. 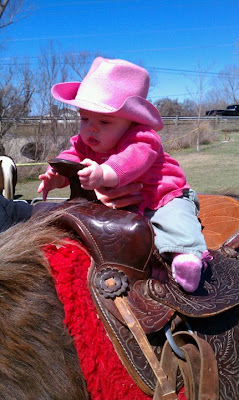 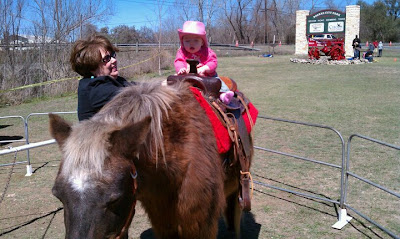 Nanners on a horse. If you look closely you can see her mouth open. She wants the saddle horn. She's at the age where she wants everythign in her mouth. NOT a dirty saddle horn!! Says Mama. Only gross tough girls eat saddle horns. Ladies, can be tough, but they aren't gross. :)

On Sunday we went out, again with my parents, to Camp Verde Texas. It's near Comfort/Center Point and there's a general store. They serve yummy sandwiches and soups. I had the de ja vu and tomato soup. It was delish. Click here and scroll to the bottom to download and view the pdf menu. My dad enjoyed telling us the history of camp verde and how it was an old military outpost and they brought in camels instead of horses because camels can last longer without water and all that. But, the soldiers ended up hating them because they are mean and spit. I'm not sure the "rest of the story" but you can check it out here. There are camel statues and things everywhere and it's referred to as "The camel experiment" The general store is really pretty and there's lots of things to shop and buy!! It has a nice outdoor patio and a river down front and people were pin-nicking (sp???) I can't "steal" any photos from the internet but check them out here. There's some of the camel experiment, the shop, the historic building, etc... 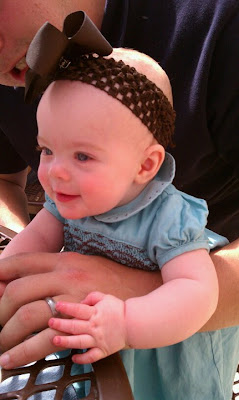 Anna, after her lunch of peas and apples, smiling at her Mimi

Then we went to Medina, about 15 minutes away, and introduced mom and dad to apple ice cream from the Apple Store/Love Creek Orchards. We've eaten here since we've been camping out at koyote ranch (yes Koyote w/ a K) and it's super delicious. You've got to go if you ever want to get away. it's about 10 or 15 minutes from the Bandera side. The drive from Camp Verde to Medina was gorgeous. I wanna build a home out there someday when I win that lotto I dream of. Oh, they sell apple trees at the apple store (and, why wouldn't they?!) and there is an apple tree named Anna. The last time we went I was about 4 months pregnant and we didn't know if we were havinga  boy or a girl but we had decided on Anna. i wanted the tree so bad but that particular tree doesn't produce fruit north of I-35 and 90 but I don't care because it flowers SO beautifully. It's rightfully named Anna. ;) You also have to buy two different types of apple trees in order for them to pollinate and continuing producing fruit. With the Anna you have to get the Dorsett. one day, we'll have an anna and dorsett tree out in front of Anna's bedroom window. :) 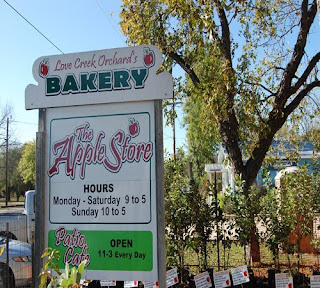 There's the apple trees behind the Apple Store sign. I want the Anna tree! And, I have to get the Dorsett so it'll bloom. :) 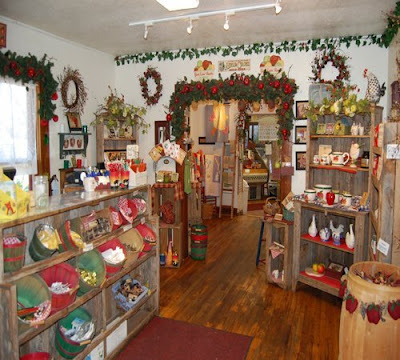 This is looking in from the front door. You can't see the ice cream machine but it's there. Filled with yummy goodness that is apple ice cream. it's like cold, cream apple pie. It's better than I'm making it sound.