TV or no TV for babies?

OK. I'm going to discuss a hot topic in the world of babies/motherhood. The devil himself. The terrible living room fixture that's going to ruin your child's life. The television. Ha! Just kidding...
Do you let your baby watch tv? I do. I do not use it as a baby sitter but like most things in life one extreme or the other is always bad. I like a happy medium. Anna watches tv if I have to get in the shower and Blake has to leave for work early or if I am making dinner and Blake is taking out the trash or doing other things. However, she is not sat in front of the television. I put her in her jumperoo or pack and play with her books and doll. The tv is just on. And, honestly it's just background noise to her. She hits her music button on her jumperoo or chews on her doll's arm and pays no mind to what is playing on the tube. She'll occassionally glance when Moose A. Moose makes an appearance to sing the ABC's or something. Is this bad? Am I ruining her life? (sarcasm...) I have four nieces ages 14 (omg) to 2 years. They all did pretty much the same thing; tv was on but they played and did things and ran in and out of the house playing. They were never obsessed with the tv and are not overweight, not one of them has ADD or is on meds, and they are all on the honor roll, well except for Brinley who is only 2 and isn't in school yet.

I find it funny that some people freak out and don't allow it at all until the age of two. What difference does that make if you wait until 2 or whatever recommended age?? If you wait that long they aren't going to know what to do and become obsessed with it. "Why would I play with these boring toys when I have this new moving bright colorful machine thing?" I don't know...that's probably extreme too.

I do know one thing and I don't want Anna to sit around all day watching tv. When we first put Anna in daycare, not the fabulous one she is in now, there was a tv there and everytime I picked her up the older kids were sitting in front of it. It was on all day I am sure. that was one thing that bothered me and one of the reasons why we left. I have a tv but it isn't on constantly and I don't want Anna to sit around all day while I am paying someone to play and interact and teach her things. So, I do draw the line somewhere. :) Like I said, one extreme or the other is always bad.

I know some people probably think it's funny and terrible that I have the tv on around Anna and let her watch some Sprout and Nick Jr. shows. Oh well. And, I don't think it's bad to not let your child watch television I just really want to know who is on the AAP Board or who says and makes up these rules? Each baby is different. Each mom and family is different. Do you take everyone's advice or what is good for you? Hopefully what is good for you. It's just so easy to be overwhelmed as a mom and the feeling that you can always do better. There's a barage of emails being sent that scream "Don't do this!!" and "You better do this!!" and it's easy to fear that you are going to screw up your child's life forever. Believe me, if I do that it's NOT going to be because of Nick Jr. ;)

Here's a poll that was on my Baby Center email today that got me thinking of this topic. 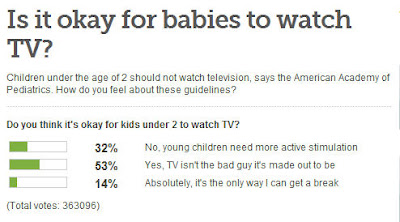 53% of those who voted (I didn't vote; just viewed the results without casting my vote) said that "Yes, TV isn't the bad guy it's made out to be."