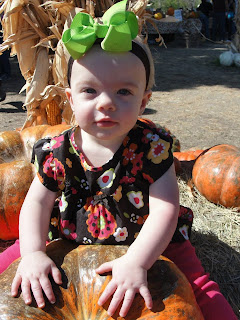 Sunday afternoon Mimi and I took a little one hour road trip with Miss Anna to Love Creek Orchards Pumpkin Patch in Medina. Anna had the most fun! We met one of her little people friends there, Caleb, and his parents Stephanie and Billy (our friends :))! At first they weren't really sure what to do when we sat them on a bale of hay in the middle of a mound of Cinderella Pumpkins. But, what a site it was to watch them soak in everything around them. We got some cute pictures of their puzzled faces because I was "yelling" at them, acting like a fool, so they'd look at the camera. 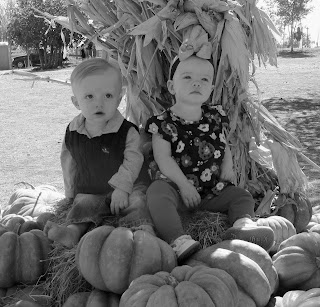 As the afternoon continued they got used to their new fall surroundings and wanted to touch, feel and play with all the pumpkins, hay and corn stalks that surrounded them. Can you imagine being a 2 foot tall little person seeing pumpkins for the first time? What is that semi-round bumpy thing? Anna wanted to pick some of them up but most weighed more than she did but she gave it her best effort and had fun practicing her punkin chunkin skills! 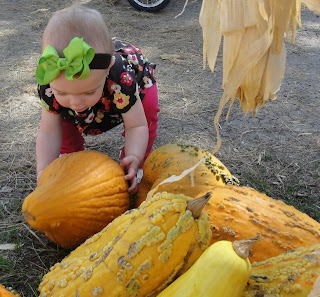 Anna wanted to play with them so badly that she didn't want to be pushed in her stroller. She wanted down to walk amoungst the orange, white, blue and grey pumpkins and warty gourds. She loved feeling the bumpy ones and had the most fun walking around. I'm so sad I didn't get a video of her but I got some good pictures of her and a lot of shots of her in awe of the pumpkins and cute people watching pictures where she's gazing off into the distance. 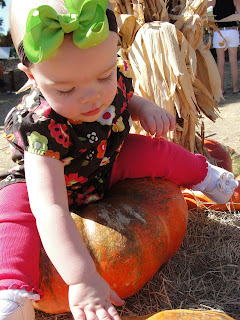 After some shots in the pumpkins we enjoyed the local fare and our favorite, Apple Ice Cream, from the Apple Store in Medina - they had a food booth out there. Medina is where we go camping at Koyote Ranch just a few more miles down the road from Love Creek. (I highly recommend! The best camping experience ever! Cabins, RV hookups, tent camping sites but the bathrooms are immaculate and have granite countertops, pool and a store/restaurant with live music most weekend nights...but, that's another blog) Anyway, we always stop at the Apple Store on the way back home and get some Apple Ice Cream and Apple Pie in a Jar and Cider Sauce. SO good with vanilla ice cream. Such cute gift stuff too! Oh, and they sell apple trees. They have an Anna Apple Tree! Our last camping exersion was back in May 2010. I was pregnant and didn't know what we were having at the time but if it was going to be a girl we knew we were naming her Anna. I so wish we would've picked it up. It doesn't produce fruit unless it's in the coastal valley of Texas but it flowers beautifully and just because it's named Anna I want it for our yard. Maybe on our next trip out there! And, Anna can actually help us plant it. Or, just watch us plant it. :) 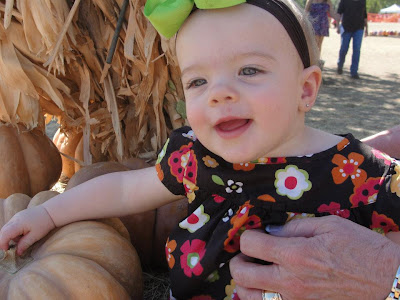 Ok, back to the pumpkin patch...I'm definetly taking Anna back next year. She'll be 27 months and I know will have even more fun. There was a ton of stuff for little ones to do! There's a petting zoo, a pond with ducks swimming, a little hay maze, tractor rides, food booths, paint-your-own pumpkins and much more. I'd highly recommend it. I really wish we were going this weekend because it's supposed to be cool and one of her crotched little beanie hats would make for some precious pictures!